You can’t stop the future.
You can’t rewind the past.
The only way to learn the secret . . . is to press play.

Clay Jensen returns home from school to find a strange package with his name on it lying on his porch. Inside he discovers several cassette tapes recorded by Hannah Baker–his classmate and crush–who committed suicide two weeks earlier. Hannah’s voice tells him that there are thirteen reasons why she decided to end her life. Clay is one of them. If he listens, he’ll find out why.

Clay spends the night crisscrossing his town with Hannah as his guide. He becomes a firsthand witness to Hannah’s pain, and as he follows Hannah’s recorded words throughout his town, what he discovers changes his life forever. 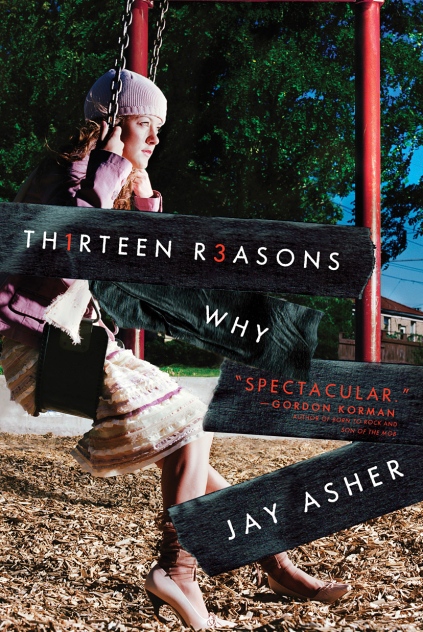 When you see a book is about suicide you expect it to be hard hitting but THIRTEEN REASONS WHY really hits you in the stomach. I read most of it with my heart in my mouth.
I read this in two days because I really could not put it down. I was enthralled and gripped by this story like no other. Yes it was tough to read with a subject matter that would be hard to deal with but it’s written in such a captivating way that you need to know the ending.
Now you know from the beginning this isn’t a happy ending. A girl is dead but hearing the reasons for it really make you stop and think. Do we really know what that girl is thinking? Should we say hi to the person we pass on the street everyday just so they know they have been noticed?
Suicide is such a taboo topic but Jay deals with it in such a way that I think it will make people ask for help and other people notice someone who may need it.
This book is not easy to read. Not only does it deal with suicide there are other gut wrenching issues too like rape. It is very difficult and some people would struggle.
This book will stay with me for a very long time and it’s one I would read again just to remind myself what a rumour can do.
This is definitely a 5 star read for me.

You can buy THIRTEEN REASONS WHY from the following booksellers (and many more!);