Welcome to my stop on this Blog Tour for the release of HYDRA (Six Stories #2) by Matt Wesolowski.

I would like to say that it is truly my pleasure to be invited onto this blog tour! Particular thanks to Anne Cater, Orenda Books and Matt Wesolowski who gifted me an early copy of HYDRA. I am forever grateful and promise that the review below is 100% honest and of my own views.

One cold November night in 2014, in a small town in the north west of England, 26-year-old Arla Macleod bludgeoned her mother, father and younger sister to death with a hammer, in an unprovoked attack known as the “Macleod Massacre.”

Now incarcerated at a medium-security mental-health institution, Arla will speak to no one but Scott King, an investigative journalist, whose Six Stories podcasts have become an internet sensation. King finds himself immersed in an increasingly complex case, interviewing five witnesses and Arla herself, as he questions whether Arla’s responsibility for the massacre was a diminished as her legal team made out.

As he unpicks the stories, he finds himself thrust into a world of deadly forbidden “games,” online trolls, and the mysterious Black-eyed Children, whose presence extends far beyond the delusions of a murderess.

So, want to know what I thought?

I’ve come to the conclusion that Matt Wesolowski is a Warlock. He must be. For him to take 26 letters of the alphabet and create something pretty outstanding like HYDRA is magic to me!

After reading SIX STORIES last year – I could not WAIT to get my hands on HYDRA. The premise of writing a podcast style serial is a niche which Matt has completely taken over and I can’t think of any other book that adapts this kind of story telling. THAT is a great thing! It makes for a great conversation starter when people ask me for recommendations.

Now, do we talk children? More specifically…creepy, scary children! Black eyed children. Nightmare inducing stuff. It’s creepy, sinister and wonderful. It adds that added horror element to an already intense and chilling story. Arla’s account of what happened to her family and just as important, herself makes for uncomfortable reading.

As with SIX STORIES, the plot moves along at a steady pace. HYDRA is not about the fast action, but about the slow burn. The reader is given time to fully digest each episode and form their own opinions of the story. But this is a Wesolowski novel, there is a twist. A twist that pulls the rug out from under you and leaves you slamming to the ground with a ‘what the f… just happened?’.

I CANNOT wait to read what is next for Scott King! Just how deep and twisted can we go?! I’ll take my number and wait in the long line of readers/authors/bloggers who will continue to champion both Matt and his novels!

Matt Wesolowski is an author from Newcastle-Upon-Tyne in the UK. He is an English tutor and leads Cuckoo Young Writers creative writing workshops for young people in association with New Writing North.

Wesolowski started his writing career in horror and his short horror fiction has been published in numerous magazines and US anthologies.

Wesolowski was a winner of the Pitch Perfect competition at ‘Bloody Scotland’; Crime Writing Festival 2015, his subsequent debut crime novel ‘Six Stories’ was published by Orenda Books in the spring of 2017.

You can buy HYDRA (Six Stories #2) from the following bookseller; 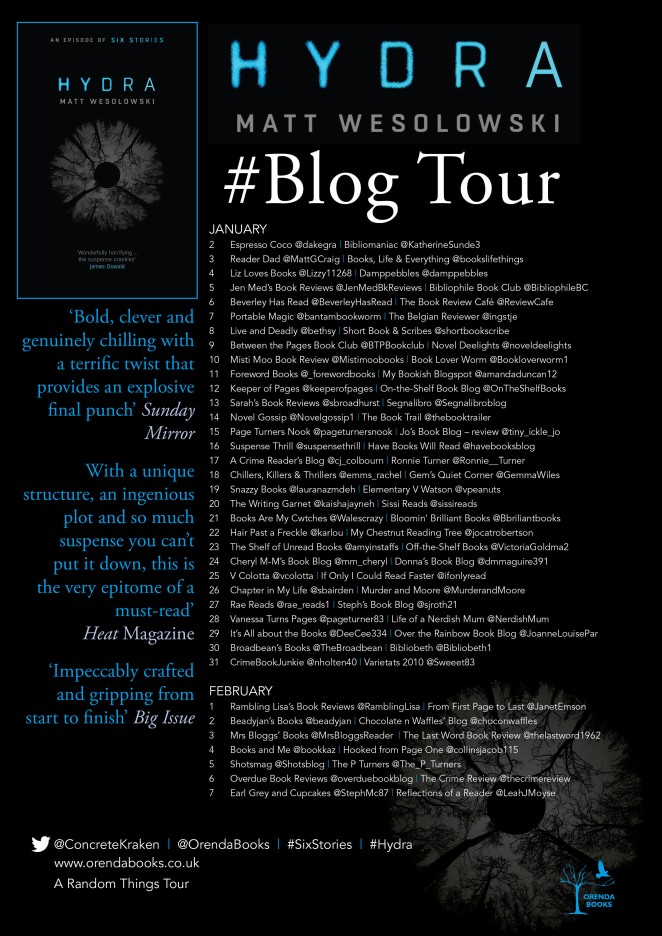