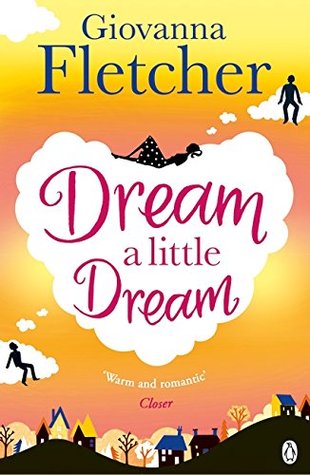 The new gorgeously romantic novel from bestselling author of Billy and Me and You’re the One That I Want, Giovanna Fletcher.

Sarah is doing just fine. Sure she’s been single for the last five years, and has to spend an uncomfortable amount of time around her ex-boyfriend, his perfect new girlfriend and all their mutual friends. And yes, her job as a PA to one of the most disgusting men in London is mind-numbingly tedious and her career is a constant disappointment to her mother. But it’s really okay. She’s happy (ish).

But it’s not surprising that when Sarah starts dreaming about a handsome stranger, she begins to look forward to falling asleep every night. Reality isn’t nearly as exciting. That is until her dream-stranger makes an unexpected real-life appearance, leaving Sarah questioning everything she thought she wanted.

Because no one ever really finds the person of their dreams… do they?

When I saw this book in the library I thought I would pick it up and give it a try. The cover looked like the kind of book I would read and the blurb appealed to me.

I was pleasantly surprised by this book. It is definitely what I would put in the “chick lit” category and you know the ending from the first page but sometimes I like to read a book I don’t need to concentrate on and can lose myself in easily. Dream a little Dream definitely allowed me to do that. I loved going along with Sarah as she begins to dream about someone that was once a part of her life. Things then get complicated as Brett suddenly reappears in real life.

I found Sarah very likeable. She seemed to dote on her friends and even put their needs before her own emotions when it came to dealing with the break up from her ex, also part of their friendship group. As Dan, the ex, moves on with the woman he left Sarah for, she struggles to deal with that relationship as well as dealing with her over bearing mother and a boss that sounds horrible to work for.

Sarah seems to grow within herself as she first asks for a promotion and then deals with the ex situation. I think she will resonate with a lot of people that are just plodding. Although we don’t get to know Brett as well, he comes across as very sensitive and I found myself smiling at the relationship that develops between the two.

Sarah’s friends also have a lot going on behind the scenes as we discover when her best friend has to deal with a dramatic heartbreak. This added a lot of emotion to the story and I found myself feeling heartbroken for Carly and what she was dealing with.

The book overall was a very nice story that I finished with a happy sigh and a lot of warmth inside. I would highly recommend for fans of chick lit just looking for a easy book to lose themselves in.

You can buy DREAM A LITTLE DREAM (Dream A Little Dream #1) from the following booksellers (and obviously many more! Support your local booksellers where you can!)