Welcome to my stop on this Blog Tour for the release of GUILTY…UNTIL PROVEN INNOCENT (DI Braddick #3) by Conrad Jones.

I would like to say that it is truly my pleasure to be invited onto this blog tour! Particular thanks to Sarah Hardy & Emma Welton, Bloodhound Books and of course Conrad Jones who have arranged this extract of GUILTY…UNTIL PROVEN INNOCENT (DI Braddick #3).

Following a storm, a body is washed up on a beach, intricately wrapped in wire mesh. DS Marcus Braddick is struck by the similarities to a triple murder case from 7 years before – A case that eluded his predecessor, Alec Ramsay.

Across the city, a teacher is accused online by a Predator hunting group. As his life unravels, a killer stalks the hunters.

He turned down the radio so he could hear the muffled cries for help coming from the boot. The victim’s voice had been strong at first, full of anger. The energy and venom were waning. He was incoherent now, sounding almost demented. A thin smile touched his lips as he listened to the anguish. He would drive around for a while, taking an hour or so to reach his lair; it would feel like an age for his victim. There was fear in his voice and he savoured his fear. Listening to him plead for help excited him. He had no sympathy for him, only hatred and anger. It was his own fault that he was where he was; he had asked for everything that was about to happen to him. Retribution. That’s what it was. He would make him understand what he had done when he was broken, when he was helpless. It wouldn’t take long to break this one. He could tell. Some were stronger than others. At the end, they were always the same: sorry and apologetic, but their apologies were too late. They would beg for mercy at the end but there was none to be had. Where was the mercy when he had needed it? Nowhere, that’s where.

He had realised a long time ago that the world was short on mercy. Mercy and giving the benefit of the doubt were gifts that humans talked about, but rarely delivered. People are fickle. One minute you’re loved and respected, the next you’re a pariah. Given the right circumstances, lifelong friends could become enemies in the blink of an eye. Innocent until proven guilty – that was how it was supposed to be. It was bullshit. Mercy and forgiveness were rare. They were commodities that not many could afford.

He could hear him sobbing again. The anger had dissipated and burnt out – it always did. They always started out angry, shouting abuse and screaming threats. That was when they realised they were in the grip of evil. There was no going back. This was where they would meet their end, screaming, begging for mercy. Yet still they threatened him. He had heard it all. It didn’t matter. Nothing would stop him. That was the point: to show them how it felt to be helpless. They had to feel the total desolation of being helpless and alone, teetering on a knife edge between life and death, the pain so intense that death was the desirable option. Being helpless was all part of the horror they had to suffer so they could understand what they had done. Fear blurred the reality in their minds. When they realised that they couldn’t break the wire that was bound around their wrists and ankles, they would change; they couldn’t stop him hurting them, and they couldn’t talk their way out. Once that was accepted, the threats would subside. They would realise that he wasn’t about to release them, not now, not soon, not ever. Once it had sunk in that this wasn’t a situation with a happy ending, their spirit would weaken, and eventually break. The adrenalin waned from their bloodstream and they would resort to seeking mercy. But there was no mercy.

They had nothing but pain and suffering to look forward to. Pain and suffering and fear. The fear in their eyes was what drove him. It fuelled him. It was the price they paid for what they had done. They would never be found. Their loved ones would never know why they didn’t come home. They would suffer too. They would always wonder where they were and what had happened to them. They would always miss them, always grieve for them. That made him happy. He had suffered and now it was their turn. Every action had a reaction: yin and yang, karma, an eye for an eye, whichever universal power people believed in. This was revenge, and it worked for him. It would be a long night for his victim, a very long night indeed. He lit a cigarette while he listened to the dulcet tones of suffering coming from the boot.

I cannot wait to read this book in full!

I hope you enjoyed this extract and it’s spurring you on to get your hands on a copy 🙂
About Conrad Jones;

Conrad Jones is a 50-year-old Author, originally from a sleepy green-belt called Tarbock Green, which is situated on the outskirts of Liverpool. He spent a number of years living in Holyhead, Anglesey, which he classes as his home. He worked in management at McDonalds Restaurants Ltd from 1989-2002, working his way up to Business Consultant (area manager) working in the corporate and franchised departments.

On March 20th 1993 he was managing the Restaurant in Warrington`s Bridge St when two Irish Republican Army bombs exploded directly outside the store, resulting in the death of two young boys and many casualties. Along with hundreds of other people there that day he was deeply affected by the attack, which led to a long-term interest in the motivation and mind set of criminal gangs. He began to read anything crime related that he could get his hands on and links this experience with the desire to write books on the subject.

He signed a three book deal with London based publishers, Thames River Press. The Alec Ramsey series is now 7 books long with an average of 4.8 stars from over 2000 reviews. Conrad has also written The Soft Target series, which has received critical acclaim.

You can buy GUILTY…UNTIL PROVEN INNOCENT (DI Braddick #3) from the following booksellers; 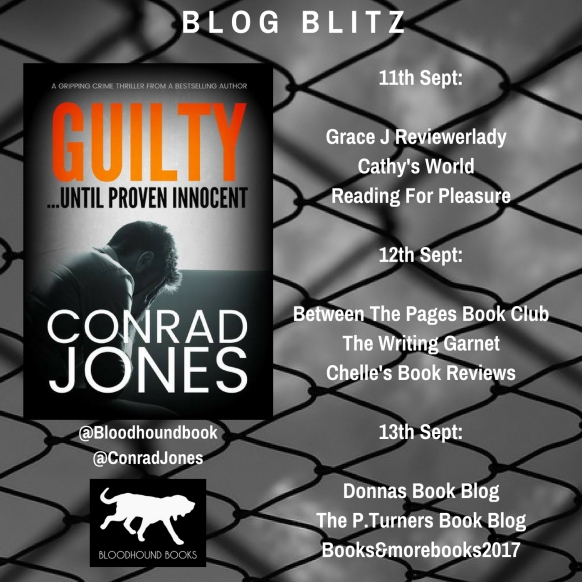