Waking up in Vegas was never meant to be like this.

Evelyn Thomas’s plans for celebrating her twenty-first birthday in Las Vegas were big. Huge. But she sure as hell never meant to wake up on the bathroom floor with a hangover to rival the black plague, a very attractive half-naked tattooed man, and a diamond on her finger large enough to scare King Kong. Now if she could just remember how it all happened.

One thing is for certain, being married to rock and roll’s favourite son is sure to be a wild ride.

LICK is another book that *M* has been telling me about now for FAR too long! And in the spirit of trying new authors, I could put it off no longer. Let me tell you, I devoured this book in an AFTERNOON! This should give you an indication of two things…first, what a quick/easy read this it (which is no way me slating the book!) and secondly, how addictive the story is! I’m sure we’ve all had fantasies of what would happen if we were in Evelyn’s shoes! (FYI…Corey Taylor or Dave Grohl!)

This is the first book in the Stage Dive series and it starts with a bang! Evelyn wakes up in her hotel room after a few too many tequilas celebrating her 21st birthday to discover she has married the guitarist of one of the biggest bands in the world! Realising that she can’t remember any of it, conversations are had as to whether the marriage would continue.

What follows is a ‘will they/won’t they’ story as each of them are trying to work out what to do next. Evelyn is thrown straight into David’s world and it’s overwhelming to say the least! Although she is only 21, Evelyn carries herself well and isn’t portrayed as some meek, mild and naive young woman. She carries herself well and compliments David very well.

Despite his status, David isn’t an arrogant rocker. He is actually a very sweet person, who knows what he wants, but asks permission rather than demanding it! He’s not all sweetness all the time. There are moments where you want to wag a finger in his face and give him a stern talking to – but he already knows the next step and is walking it before we can catch up.

LICK was a great introduction to the series and I’m keen to meet the remaining members of the band throughout the series!

You can buy LICK (Stage Dive #1) from the following booksellers (and many more! Support local booksellers where you can!); 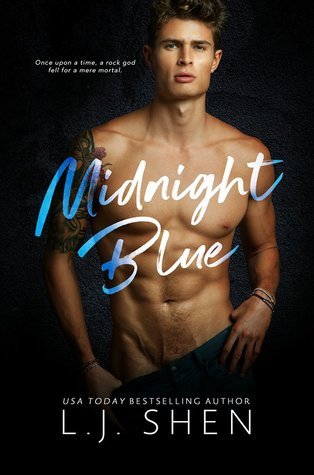 It should have been easy.

I needed the money. He needed a babysitter to keep him from snorting himself to death.
I was cherry-picked especially for him. Responsible. Optimistic. Warm. Innocent.
The worst part is that I should have known better.

Alex Winslow. British rock star. Serial heartbreaker. Casanova with whiskey eyes.
“Don’t get near the devil in a leather jacket. He’ll chew you up and spit you out.”

Guess what? I didn’t listen.

I signed the contract.

My name is Indigo Bellamy, and I sold my soul to a tattooed god.

Problem was, my soul wasn’t enough for Alex Winslow. He ended up taking my body, too.

Then he took my heart.

Then he took my all.

Holy shit. When I downloaded MIDNIGHT BLUE onto my Kindle – I wasn’t expecting to be left in a book hangover this bad! It’s not often that I read a book that literally takes over my entire soul! I could not put this book down and every moment I had spare – I was cramming pages into my eyeballs!

I was gripped by the story in the first few pages. Bad boy musician Alex Winslow is forced to have a ‘sobriety companion’ accompany him on his latest world tour. Indie is that person and what then follows is a pretty intense and passionate relationship between the pair.

This is my first Rock star romance and the bar has now been set REALLY high. Alex is, let’s put it bluntly, an arsehole! He’s success has given him what he sees as the right to talk and treat people like shit. On top of that, he drinks and uses drugs. A cracking combo! Then we have Indie who is young, been through some shit in her life, but is making the most of what she has. She’s not meek and shy…she has some sass and when the pair first meet and that sass is exchanged – you can’t help but fall in love with her spirit. It was always going to make the relationship with Alex and her interesting.

I think what made this book all the more special for me was Leigh’s writing! My word that lady can write! I ate up every word on every page! She is a master wordsmith. Being able to draw a reader in and convey so much emotion in 359 pages….. I could swear at her!! I’m eager to read more of her work!

I loved this book so much that I’ve already recommended it to everyone that will listen! If Passionflix could look at turning this into a movie…that would be great!

You can buy MIDNIGHT BLUE from the following booksellers (and many more!);